Cats appear everywhere in our society, we see them in our daily lives, from your home to the office, and on the Internet. Stories, tweets, pictures, videos, memes, gifs,… It’s a simple fact that we human loves cat. Who wouldn’t?

They were brought to America from Europe as pest controllers. With the colonization of the continent, many immigrated from their country to the new promising land. But the overpopulation caused many problems, and one of those is pests, in particular rats! That’s why many people brought along a cat to help them with this problem.

With approximately 88 million domestic cats compared to 74 million dogs. Even though dogs are considered "man’s best friends", cats are still loved for both their cuteness and weirdness.

And 84% of them are spayed or neutered. Matured cats, especially male ones often leave their home during oestrus. Sometimes they come home later; sometimes they don’t. That’s why owners choose to neuter their cat to prevent this.

4. Sadly, about 60 million feral cats are living on the street in the US.

They survive from gathering food from trash, hunting rats, bats and birds. Many animal organization has tried to keep control of the situation.

5. 50% of household cats are overweight.

But 91% of owners don’t know that. The healthy weight of a cat depends on several factors, especially their breed.

Make sure your feline is active and exercising at least one or two hours a day, with different interactive cat toys. Spending time with them playing is a great way to have fun with cats and kittens.

The CIA spent $20 million in the 1960s to train cats as secret agents against the Soviet Union. The first one was hit by a taxi after being released just a few minutes after. The project was later canceled.

In 2013, a former Director of the CIA's Office of Technical Service name Robert Wallace said that the project was demolished due to the difficulty that occurs during training.

Stub the Cat, for example, had been the honorary mayor of Talkeetna, Alaska, from July 1997 until his recent death in July 2017. Not only did he become the town’s tourist attraction, but Stub also widely loved and respected by the people in town.

Some cats had survived a fall from as high as 32 floor building due to their righting reflex. It’s the same reflex that keeps them balance when climbing in difficult places.

Which allows them to see clearly at light level six times lower than humans. That’s why cats are a dangerous threat to rodents animals that often work in the night. One of the reasons, why we keep them domestic. From all the cat facts on this list, this is useful and most owners should know it.

11. Cat’s tail is the most important part of its body (well, except the head).

The tail keeps your cat balanced and stabilized whenever they’re jumping, climbing, or walking. It also shows the cat's current emotion and attitude.

Yup, that's true. Just make sure you take care of your cat well by feeding it nutritious cat food (not those cheap canned foods). Most manufacturers tend to decrease the amount of nutrients and replace them with carbs since it makes the price of the product lower.

And did you know that the oldest cat ever lived is Creme Puff (confirmed) who was born on August 3, 1967, and died on August 6, 2005? He lived 38 years in this life which means that he is over 266 years old in human years. A solid proof to the myth which says that cats have nine lives. This is one of the most fascinating cats facts we've come around.

That’s why we often see our feline lazily laying on their bed. But even though they spend around 70% of their life sleeping, cats are still very consciously aware of what’s happening around them while they sleep. 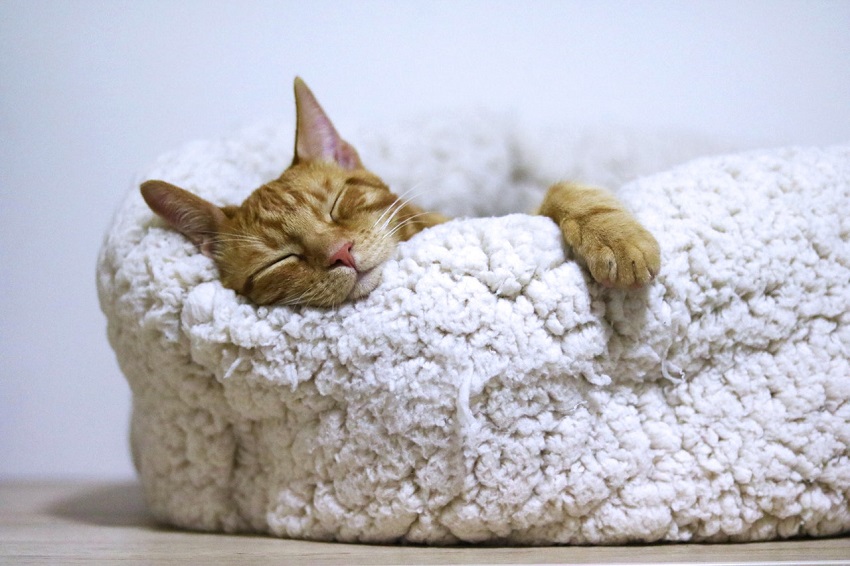 The richest cat in the world is named Tomasi and lives in Italy. In 2012, a 94-year old Italian heiress passed away and left her $13 million fortune for her cat. Therefore, making him richer than most of us.

They were considered a sacred animal. When a cat died, people will shave off its eyebrows to mourn its death. Cats are also considered the spirit animal of many ancient tribes and religious groups.

Only 11.5% people consider themselves “cat people.” These are the people that love cats and enjoy watching and playing with them.

“Cat people” are also 11% more likely to be introverted. Like their “spirit animal,” these people don’t like to communicate through words or actions.

19. Cat owners are 17% more likely to have a graduate degree.

Some research has shown that cat owners often like to stay home, rather than go outside. And during that time, they often study (probably). That’s is why they came up with this fact.

At Disneyland each night, after the park closed, it fills up again, only this time there are hundreds of feral cats. This help keeps rats under control since there is lots of leftover food that has been thrown out in the trash.

Cats like to squeezes themselves into small objects since they need this skill to avoid bigger predators in the wild. Cat also love to scratch things, this helps them to sharpen their claws. Even though they have been domesticated for thousands of years, cats spend time every day to sharpen sharpen their skills and then pass it on to the next generations.

Our list of cat facts is over, and we hope you found these facts interesting and entertaining. Everyone of us should treat their cat with care. They may be weird and sometimes grumpy, but deep down, they love you.

We hope you enjoyed reading these fun and interesting facts about cats. And if you want to find out more exciting information about these felines, check out others columns on our website.

Why Does My Cat Bite Me When I Stop Petting Him?

How Much is a Male Calico Cat Worth?