What Does Catnip Do To Cats?

Catnip also referred as catmint, catwort, is a herb that is part of the mint family. It is known for stimulating cats (source). If you give catnip to a cat, it will start rubbing its cheeks all over it, and may try to eat it.

They'll soon start rolling on the floor, flipping, and acting a little crazy. Their behavior may entertain us, but it does raise some questions like: How does catnip effect cats? Is it good and safe for them? along with many others.

Before you introduce catmint to your furry friend it's best to learn more about this herb, and what are the different ways you can introduce it to your cat. The scientific name for Catnip is Nepeta cataria, or normally known as cat-mint. The plant belongs to the mint family and was first found in areas of Europe, Africa and Asia then later imported to be grown in North America (source).

In nature, catmint can be grown up to 3 feet high. There is a chemical component found found in the stems and leaves called Nepetalactone which attracts cats and make them feel "high".

There are a few other plants that have a similar effect to cats, such as: alerian root, silver vine, and Tatarian honeysucCat’s behaviorskle.

Does Catnip Effect All Cats?

According to scientific studies, not all cats are interested in catmint, the number will fall in about 50 to 75 %, and they are not classified by breeds or genders.

Cat’s behaviors to catmints are mostly generically inherited. Some of them do not even react a little bit to this herb during any circumstances, but some will be over affected.

Moreover, Nepeta cataria only works with biologically mature cats. That means under six or eight weeks, kittens may be immune to catnip.

The duration and response to catmint lasts about ten minutes. After that, felines will be under recovering period of about one hour when they will no longer be affected by that herb.

How Does Catnip Effect Cats?

It's important to note that some cats won't be effected by catnip at all, while others will be sensitive to this herb. Kittens won't experience any changes from catnip until they become 3 to 6 months old.

Felines are attracted to the volatile oil (an oil that evaporates in the air), which is given off by the chemical Nepetaloctone.

Usually, cats will first smell and sniff catmint, which will make them lick and try to eat the plant and its leaves, as well as roll on the floor. The more they crush the plant, the more Nepetaloctone is vented, and your cat will start to rub it's cheeks and chin on it, and feel very excited.

In some cases, felines will actually feel calmer and mellow after eating or being exposed to the plant.

The effect last about 10 minutes, so it wears off very soon, after which for the next two hours your feline won't be affected at all.

Why Does Catnip Affect Cats?

The Nepetaloctone will enter a cat's nose, and from the nasal channel, the scent tie up certain receptors, commonly, rouse sensory cells in brain for further stimuli. The front brain, where sensing processes are analyzed, will be in charge of tacking scent.

Special Nepetalactone excite some regions of the brain where behavioral and emotional responses to stimuli are under control, amygdala and hypothalamus. The responses of these regions come out, as people can see, over excitement and instant rubbing of head and body.

What Are The Benefits of Using Catnip?

Many cat owners overlook this, however felines need to be stimulated mentally and physically on a daily basis, otherwise they can get depressed.

Cats are born to move and hunt, however when they live in a calm indoor environment, they can begin feeling depressed, aggressive, or anxious. That's why we should spend more time playing with them and provide them with different stimuli.

Catnip is not addictive to felines, and will not get them "high" like humans who are using drugs for example. It won't make them hallucinate either.

However, their behavior will change, and they'll be more hyperactive and in some cases aggressive. They'll be rubbing and chewing the catnip plant more and more, so that more Nepetalactone is released. 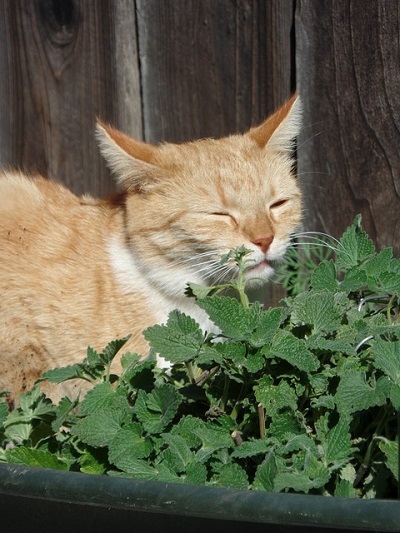 If you have more than one cat at home, make sure you introduce catnip one feline at a time.

This will prevent any of them being aggressive and fighting with each other.

Also, this way, you'll know how the herb's response to each of your pets at home.

As we mentioned, the effects are short lived, and after about 10 minutes they'll wear off.

Yes, cats and kittens can eat catnip, and in this case it will act as a sedative. Be careful that your feline doesn't eat too much, otherwise it may cause diarrhea and vomiting.

It is non-addictive, so you can consider growing some in your garden or as a house plant. If you decide to grow it in your garden, remember that this is a vigorous grower, and may invade your garden like a weed.

Can a Cat Have Too Much Catnip?

If you're introducing catnip to your feline for the first time, make sure you give a little bit and then monitor how it reacts to it and if experiences some stomach discomfort.

Another way to introduce the herb to your cat is by getting them a cat toy, which contains catnip inside. This way, they'll only be rubbing it and trying to bite it, however they won't consume any.

Why Does My Cat Bite Me When I Stop Petting Him?